15.12.2021 | Company Announcement / Press release
KATI to Cut its Carbon Footprint by Half at Keliber’s Drilling Site

Oy Kati Ab, a long-term drilling contractor of Keliber’s, has started to use biofuel in the drill rig at Keliber’s exploration site in Central Ostrobothnia. The measure will reduce the emissions caused by drilling by more than 50%.

“Taking the environment into consideration and minimising the negative impacts is a guiding principle for us at Kati as well as Keliber. When we learned that Neste MY Non Road Diesel™ was available also in Northern Finland this autumn, Keliber was the first company we proposed to introduce it, and we received a positive answer right away,” explains Tapani Niskakangas, Acting Managing Director at Kati.

According to calculations made at Kati, the switch from regular fuel oil to biofuel makes it possible to reduce emissions by 50% or even more. It is estimated that during 2020 drilling at the Keliber work site generated emissions of 78.04 tonnes of CO2e, of which 95.2% was caused by fuel usage. If biofuel had been used, the estimated emissions would have been 37.90 t CO2e or 51% less. The emission reduction (40.14 t CO2e) is equivalent to 286,714.3 kilometres by car, which would take one 7.15 times around the globe.

Keliber’s CEO Hannu Hautala regards the fuel switch as a good example of sustainable operation, which Keliber is committed to: “We are continuously looking for ways to reduce our environmental impact and improve our operations when new possibilities emerge. I am happy about this opportunity to switch to renewable energy at the drilling site.”

Kati started to use biofuel at the Keliber site during the second week of December. According to Tapani Niskakangas, the switch was easy: the machines run on biofuel as smoothly as they do on fossil fuel. When it comes to safety issues, biofuel is better because it does not endanger water organisms or human health. The price tag for biofuel is about 25% bigger than for fossil fuel, which means an increase of about 2% in the total drilling cost.

“Keliber is the first of our customers to use biofuel. We are interested in expanding its use, but its popularity has a lot to do with logistics. Today, we transport the MY renewable fuel from Kemi harbour to our storage tank in Kalajoki,” says Niskakangas.

Oy Kati Ab Kalajoki is an expert in ore exploration and diamond core drilling. The company has a certified environmental management system since 2004. Cooperation with Keliber on the lithium project has continued for about 20 years. In recent years, Keliber has had continuous exploration and resource drilling operations, and the annual total drilling has varied from 10 to 20 kilometres. 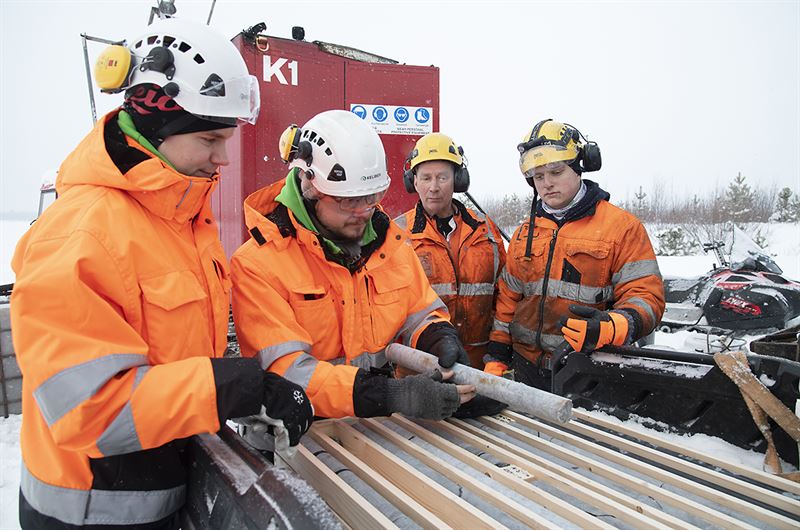 Oy Kati Ab is a family business that specialises in mineral exploration and services for the mining sector, with core drilling and related drill hole surveys as the main activity. Our clientele consists of Finnish and international mining companies as well as mineral exploration companies. In addition, we provide services for companies that operate in rock construction. We provide added value to our customers through our extensive experience, skilled personnel and standardised operating practices, thanks to which we have succeeded in highly demanding projects. We strive to advance our customers’ projects by delivering reliable drill core samples, based on our strengths and knowledge developed during our more than 40 years of operations. Our operating practices and technical innovations have made us a pioneer among environmentally friendly drilling companies. www.oykatiab.com

← All news releases and publications